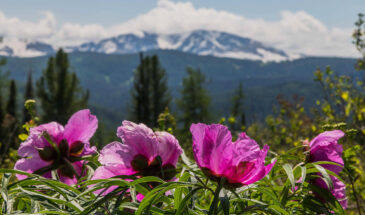 As part of a trip to Altai, you will travel in the region of the highest mountain in Altai and Siberia – Mount Belukha (4509 m). This is the alpine part of Altai, often called Belovodye. Crystal clear mountain rivers Katun, Koksa, Tyuguryuk; alpine turquoise lakes, where snow is preserved even in summer; carpets of alpine meadows and snow-white mountain peaks. Our trip will take place in the Uimon and Katandinsky valleys, where Russian Old Believers live, who preserve their traditions and customs very carefully. You will have a chance to experience mountain river rafting, horse riding, traveling to Maral farm, off-road and jeeping, trekking in the mountains and helicopter flight to Mount Belukha (optional). We will be hosted by local residents – the Old Believers, the Altai nomads. We will spend evenings on nature around the campfire and a week of unforgettable adventures is guaranteed. For internal transfers, we will use local aviation to save time by flights in a small plane through the Altai Mountains.

Arrival to Altai, the Katun River

Arrival to Gorno-Altaysk, meeting at the airport. Transfer to the hotel. Check-in at 14.00 pm. In the afternoon, we will visit Askat village (the village of craftsmen), where extraordinary and creative people live. Here you can meet artists, potters, blacksmiths, musical instruments manufacturers. We will visit the gallery of the artist Daria Golovan and attend a pottery master class in the creative gallery "Kauri". Return to the hotel. Dinner. Campfire evening.

Trip to Chemal - the most popular resort in Altai. A visit to Patmos Island, the Temple of John the Evangelist (suspension bridge leads to the temple), a walking tour along the Katun River to the mouth of the Chemal River and the Chemal .Hydroelectric Station. Souvenir market. Lunch at the Clever Hotel Cafe. In the afternoon, a trip to the maral deer farm. You will see the secrets of antler reindeer husbandry. Since Ancient China, antlers (young deer horns) have been used in medicine. You will learn how maral are bred, how antlers are harvested. Then, you will enjoy horse riding in rosemary spinney (less than 1 hour) and have a chance to see maral deer. Return to the hotel. Dinner. Campfire evening. Throat singing concert

Breakfast, check-out from the hotel. Transfer to Gorno-Altaysk airport. 13.00 - 14.00 - scheduled flight from Gorno-Altaysk to Ust-Koksa. Ust-Koksa is located in the Uimon Valley, which lies between two mountain ranges - Terektinsky and Katunsky. In the 18-19 century, the Old Believers settled down here, leaving central Russia searching for the legendary country of happiness of the ancient Slavs. The foothills of Mount Belukha (the highest mountain in Altai) reminded Belovodye most of all - the mountain taiga was rich in fur-bearing animals, wild berries and mushrooms; mountain rivers - with foaming and bubbling water, often milky white from glacial impurities. 14.00 - arrival to Ust-Koksa village. Check-in at Argut hotel in Ust-Koksa. Dinner In the afternoon, a tour to Verkh-Uimon village - the oldest village of Altai Belovodye. Here, we will visit the Museum of Old Believers (the founder of the museum, Raisa Pavlovna Kuchuganova will be our guide). Then, you will visit the Museum of the Roerich’s family. The museum is located in the peasant house of the Atamanov’s family, which has hosted N.K. Roerich and his family during the Central Asian expedition.

After breakfast, a trip to Krasnaya Gorka by UAZ. This is a small separately standing peak, which is considered an extinct ancient volcano. A cascade of amazingly picturesque lakes is located on Krasnaya Gorka. The water is very clean, of different colors, but completely cold there. In the middle of summer, you can see unmelted snow and ice floes on the lakes. There are several waterfalls between the lakes. Alpine flowers embellish the lakes’ shores. Trekking around the lakes. Picnic lunch on the lakes and return to the hotel. Dinner.

Rafting on the Koksa River

We will make a one-day voyage along the Koksa River. The river has a calm flow in the Uimon Valley, so rafting will be suitable for all ages and especially for families with children. Lunch on the riverside – we will land and cook our lunch on the campfire. A short fishing at the end of rafting. Return to the Argut hotel in the evening. Dinner.

Today you will make a trip to Tungur village, the closest village in front of Mount Belukha, the highest point of Altai. In Tungur, we can make a trip to Mount Baida – the viewpoint, where you can see Mount Belukha in cloudless weather. Optionally, we offer a helicopter flight to Mount Belukha (4509 m). We will fly over the valley of the Akkem River, land on Akkem Lake. A little trekking and return to Tungur village. Option available in high season - July-first half of August Note. Helicopter Robinson R66 is based in Tungur village, on the territory of Vysotnik tourist complex. This is the closest distance to the Mount, so the price of a helicopter tour to Mount Belukha will be fair. The helicopter capacity is 4 passengers +1 pilot. The maximum total weight of passengers must not exceed 4 X 80 kg.

A trip to Multinsky Lakes by UAZ

In the morning, we will make a trip to Multinsky Lakes (Katun National Reserve) by UAZ. The road to the lakes is rather difficult and can be overcome only by an off-road vehicle. Upon arrival to the lakes, transfer through the lower Multinskoye Lake and the Middle Multinskoye Lake by a motor boat. Campfire picnic lunch. Return to the hotel late in night. Dinner.

14.30 - 15.30 - flight from Ust-Koksa to Gorno-Altaysk. A visit to the apiary in the Sokol estate The apiary was shown in the Valdis Pelsh’s movie about Altai - "A journey to the Center of the Earth" In the evening, a farewell dinner

Early breakfast and transfer to Gorno-Altaysk airport. Departure to Moscow.

There are no reviews yet.

We use cookies to ensure that we give you the best experience on our website. If you continue to use this site we will assume that you are happy with it.Ok