The last days we are enjoying very beautiful natural phenomenon – blossoming of evergreen shrub Rhododendron Ledebourii in the Altai Mountains. We are pleased to share with you images of this Siberian spring holiday.
Plentiful flowering happens only once a year and symbolizes the culmination of Siberian spring. During the short blooming period you will be astonished by the beauty of pink and lilac clouds of fragile petals and carpets of spring flowers such as fawn lily, anemone, and lungwort.
The end of April and beginning of May is the most popular season for tourists in Altai. Everyone wants to celebrate the beginning of new life at must-see sites of the Altai Mountains. This year the weather spoils us with summer warmth. But in previous years one will be able to witness the unique struggle of spring and winter when sudden polar vortex bring blast of Arctic air with frost and snowfalls. And, of course, the prize for this weather collapse, are unique shots of snowcapped mountains and tender petals covered by fresh snow.

You can enjoy this spring holiday in our Rhododendron blossom tour in 2021
https://lbrussia.com/itinerary/altai-rhododendron-blossom-tour/ 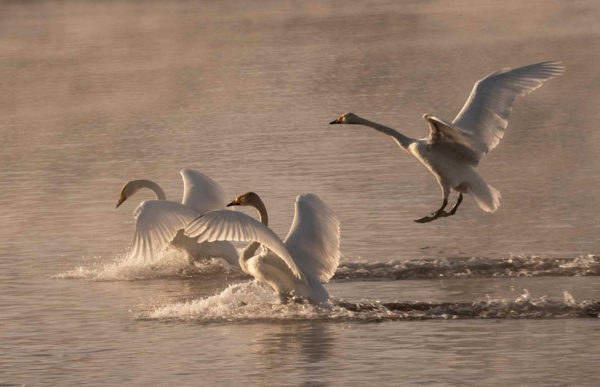 We celebrate the beginning of winter season by arrival of swans to Altai. Several hundreds swans and over then 1,000 other waterfowl annually spend a winter in non-ice covered lakes in the foothills of Altai. This is the only one such a place in Siberia with wintering swans and that is the reason why natural reserve had been established here.

Nobody knows exact where these beautiful birds fly from. Probably they come from the Arctic sea cost of Russia. But they had been documentary noticed in Altai since the 1950th. Constantly the number of swans increase from years to year.

Every swan has its own unique beak pattern. Ornithologists come here to research them and identify the birds.

However wintering swans make our snow season incredible. Come to Altai and enjoy this natural miracle.

Detailed description of the tour

Fly to Moscow and then domestic flight to to Gorno-Altaisk (capital of the Altai Republic, 1,3 hour from the airport to the hotel).

Upon your arrival we will pick you up at the airport of Gorno-Altaisk. Breakfast and excursion to the National Museum of the Altai Republic. You can observe many archaeological artefacts from the Stone Age till Turkic Period. Altai Mountains were the motherland for many ancient tribes. For example, in Denisova Cave were discovered Homo Altaiensis, absolutely new species of human ancestors. In the middle ages Turkic ethnos was formed in Altai. But the most famous archaeological artifact is the mummy of Siberian Ice Maiden or Princess of Ukok. It was discovered at the Ukok Plateau in ice burial mound near the border of Mongolia, China and Kazakhstan. There are many legends connected with the mummy and local people consider it like a deity. Actually scientists say that the woman was a shaman or priestess during her life.

Transfer to the hotel. Check-up at 4* hotel on the bank of the Katun River, Lunch and short rest.

Afternoon activities – walking tour to Chemal village. We will visit the orthodox church of the St. John the Evangelist and then have a walking route along the Katun River’s bank towards the Chemalskaya power station.

Late in the evening we will hike to Che-Chkysh Gorge to enjoy sundown over the Katun River’s valley.

Treasures of the Katun River

In the morning you will have thrilling activity (but not dangerous) – white water rafting at the Katun River. During the rafting we will stop near the Kamyshlinsky Waterfall and you can take some amazing photos near it.

At the afternoon you will get acquainted with rural lifestyle. Altai is famous for maral deer breeding. Young not ossified horns of deer are very curious and contain plenty of vital substances. We will visit a maral breeding farm and have a horse back riding excursion there. Usually marals are kept in large parks that is why we should ride to watch them.

Car excursion along the Chuisky Trakt

Today we will have long car transportation along the most beautiful mountainous highway in Russia. Chuisky Trakt is an ancient road and first was mentioned in ancient Chinese chronicles. In the middle ages it was the northern part of the Silky Road. Later it was used by Russian Merchandisers like a trade path to Mongolia. Today Chuisky Trakt is one of essential highlights in Altai and travelling along it allows to see many natural and historical sites.

You will see Seminsky Pass and Siberian pine tree taiga, rocky serpentine of Chike-Taman Pass, awesome Ilgumensky Rapid on the Katun River, famous boms of Chuisky Trakt (bom is a local name to rocky and steep banks of the river near the highway), rock drawings of Kalbak-Tash sanctuary, waterfalls near Chibit village and Geizernoye Lake.

Overnight at Aktash village in the hotel.

Accommodation – Hotel near Buryuzovaya Katun (rooms with WC and shower)

Today we weak up early in the morning – 2 hours before dawn. We are going to enjoy the sunrise and watch how the first sun rays paint the snowcapped peaks of the North-Chuisky Ridge in various shades of pink and golden colors. Before this grandiose scene we should hike about 1 hour or little more to reach the observation viewpoint on the top of a mount. But this dawn above the North-Chuisky Ridge will be one of your favorite landscapes in Altai and it is worth our efforts.

After sunrise we will have a breakfast and return travel along the Chuisky Trakt to Uch-Enmek natural and ethnographic Park. It is situated on Karakol Valley, the most sacred place in Altai. The valley was populated in early Bronze Age and has numerous archaeological monuments such as burial mounds, rock drawings, stone steles. Local people consider the Karakol Valley as a place of power and perform shamanistic rituals there. You will get acquainted with local people, one of them show us the sanctuaries. Afterwards you will have cooking class. We will cook traditional nomadic meals from sheep meat, milk products and cereals. Finally you will enjoy the throat singing, a special cultural tradition of nomads of Northern Asia. It was included into UNESCO World Heritage list.

Overnight at the guest house near the Katun River.

We use cookies to ensure that we give you the best experience on our website. If you continue to use this site we will assume that you are happy with it.Ok